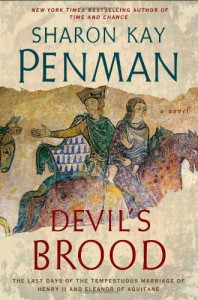 Once again, there was no disappointment in this read! I found myself drawn into the charismatic nature of Eleanor of Aquitaine, and felt as though I were moving through the pages with them. Henry could not have ever seen what his choices were doing to his sons. By refusing to give them as much freedom as he had enjoyed in his younger years, they started seething with anger, and that anger finally spilled over into rebellion. These rebellions were played out again and again, as each son sought to get what he considered rightfully his. Henry did nothing though to help their rebellious spirit, by making one empty promise after another. In the end it cost him all his sons, as they all deserted him, two in death, and the remaining two, Richard and John, once again in rebellion. Eleanor had at first approved and even helped with their rebellion, spending the last sixteen years of her marriage in confinement, as Henry had swore to her that he could never trust her again. Although their trust never reestablished, they came together to mourn their two sons, dead before their time, and also other passing family members. But they also came together to try and reunite their family, to put to bed once and for all the rebellions, but Henry was never happy if he was not in control, and his double dealing with his sons, cost him that lasting peace.

I was so drawn into this story that I could not put the book down! It was like being caught between living in the past and the present. I found myself wondering more and more what these forces must have been at the time it was being played out!
Tweet